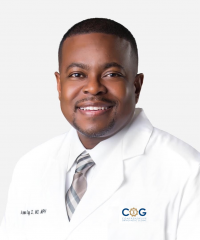 Interventional Pain Medicine
Dr. Artemus Flagg is a proud combat army veteran who served in Operation Iraqi Freedom. He was born and raised in Nashville, Tennessee. He served in the United States Army as a Battalion Flight Surgeon and Brigade Flight Surgeon for the 1st Cavalry division during his combat tour in Iraq. Following his combat tour, he was promoted to the rank of Major and appointed as the Chief Flight Surgeon and Chief of the Physical Exam Section at the DiLorenzo TRICARE Health Clinic at the Pentagon.

His experiences in the United States Army motivated him to further pursue a career in pain medicine. Dr. Flagg was selected and completed a residency in Anesthesiology and a Fellowship in Pain Medicine, both at Johns Hopkins University School of Medicine. With determination and hard work, Dr. Flagg received the Clinical Anesthesia (One) resident of the year award for outstanding achievement in patient care and citizenship during his training, and was also selected as the Chief Resident for the 2011-2012 Academic Year.

It’s easy to look at Dr. Flagg’s (Director of Virgin Island Pain & Spine) resume and see plenty of accolades and recognizable names, such as studying at Johns Hopkins University School of Medicine, or being named Chief Resident of the Year in 2011 at Johns Hopkins. The list goes on, but at the end of the day, the attentive and enthusiastic physician talks sincerely about the most important thing in his practice.

“You hear a lot of doctors and clinics say how much they care about their patients,” he said. “But here at Comprehensive Orthopaedic Global (COG) we truly believe that taking care of our patients is like helping a family member or a neighbor. I treat every patient like a family member—we love them and want what’s best for them, and honestly are focused on doing the right thing for each one.”

He believes the success goes back to what he learned in those early years as a military doctor, and coupled with the best training and education he could receive, “taught me how to help people in pain, and help them in the best way to get their lives back. My commitment for every patient is to decrease their pain and increase their functional activity level.”

With a Master’s Degree in Public Health, a former FAA Medical examiner, and successful completion of the US Army’s Flight Surgeon’s course, Dr. Flagg was promoted to Major, then named the Chief Flight Surgeon at the Pentagon. He found himself treating four-star generals, high ranking administration officials, secret service and special operations agents, and some well-known members of Congress whom he is not at liberty to name.

Everyone’s pain is unique. We treat mild and chronic pain in the most minimally invasive way possible. We create individualized treatment plans for each patient, finding the best options for physical, emotional, social and psychological aspects of pain